Quick Q&A: How are evil and suffering tied together?

Answer: It started in the Garden of Eden. Satan the deceiver told the first lie, and Eve fell for it. Genesis 3:2-5 (ESV) contains this amazing account! “And the woman said to the serpent, ‘We may eat of the fruit of the trees in the garden, but God said, “You shall not eat of the fruit of the tree that is in the midst of the garden, neither shall you touch it, lest you die.”’ But the serpent said to the woman, ‘You will not surely die. For God knows that when you eat of it your eyes will be opened, and you will be like God, knowing good and evil’”.

This being, previously known as Lucifer, before his rebellion, was at one time a perfect creation of God. But then he rebelled and became Satan. The Bible says he then became a murderer and a liar. John 8:44 says Satan was a murderer from the beginning, a liar and the father of lies.

Satan lies, and you can be sure that his lies, rebellion and evil influence will continue until Christ’s return. Adam and Eve’s decision and their banishment from the Garden of Eden has resulted in pain, suffering and death.

Satan lied to Eve just like he is lying to all of us, tempting us to follow his example and disobey God and rebel against His position as Sovereign Lord and Creator. Mankind has rejected God and has chosen not to obey Him. This decision continues to lead to suffering and death.

Satan represents total unfettered evil, and he spreads his evil influence through the very air around us, through the media, the Internet, broadcast, telephone and text. Yet you and I, today, do not need to be under his terrible influence.  Ephesians 2:1-2 tells us, “And you He made alive, who were dead in trespasses and sins, in which you once walked according to the course of this world, according to the prince of the power of the air, the spirit who now works in the sons of disobedience.” We do not need to serve the prince of the power of the air; the Bible says we are called out of that blindness.

Sadly, the majority of human beings have joined with Satan in rejecting God as their ruler.  Satan, “the wicked one,” promotes this disobedience as choice and holds sway over the whole earth (1 John 5:19)! And this powerful adversary, the Devil, does not want the Gospel preached. The fact is, he is doing his best to disrupt and cause harm, just as he did in the Garden. As 2 Corinthians 4:3-4 explains, he is now “the god of this world” who “blinds” the minds of unbelievers, to keep them from seeing the light of the gospel of the glory of Christ. Amazing! But this is what the Bible says!

Evil and suffering are often tied together. Yet as sad as we may find the hardship and pain caused by Satan-caused evil, the most devastating consequence is blindness—the spiritual blindness Satan inflicts on his victims, making them lose sight of the glorious future God has planned for His entire creation.

Have you been blinded? Most people have. But if this explanation makes any sense to you, God may be calling you to be one of the few in this age who will come out of that blindness into the Truth! 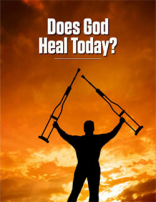