This article was written for Tomorrow’s World magazine not long after the devastating Indian Ocean earthquake and tidal wave in 2004 that killed almost a quarter-million people in 14 different countries. Is there an answer to why the world is full of suffering? There is. Read on…

The very real God of the Bible is certainly hearing the literal "groans" of the suffering people of Southeast Asia. As they—and we—are deeply humbled by the awesome forces of creation that God has set in motion, we will begin to realize that human life apart from the true God is futile. This may seem "cruel" or "unfair" to those who lack understanding of the awesome power and glory that God has in mind for those who truly serve and obey Him. But it is often the only way human beings are willing and able to learn.

An amazing number of explanations—many of them contradicting each other—have been offered as to why God "allowed" the terrible suffering resulting from the earthquake and tsunami that struck Southeast Asia last December. Of course, we should ask many of the writers holding forth against God: "Why do you, of all people, suddenly bring a real God into the picture when most of the time you totally deny His existence.”

The next question we should pose, to those who complain about a supposed irrational or malevolent God, is: "Which God are you talking about? The actual God who reveals Himself in the Bible? Or a god of your own un-biblical teaching or human imagination?"

What does the Bible actually say about our modern society and human suffering? First, it tells us that our world today is not "God's world," Notice: "But even if our gospel is veiled, it is veiled to those who are perishing, whose minds the god of this age has blinded, who do not believe, lest the light of the gospel of the glory of Christ, who is the image of God, should shine on them" (2 Corinthians 4:3–4). So the "god" of this world is Satan the devil! Even Jesus Christ stated, near the end of His human life: "I will no longer talk much with you, for the ruler of this world is coming, and he has nothing in Me" (John 14:30).

Many who are quick to say "God is dead!" quickly bring Him back to life when tragedy strikes! Then they have someone to blame! The truth of the Bible—which very few believe—is that the Creator of heaven and earth is trying to teach humanity "lessons" for all eternity. He has made mankind in His "image" (Genesis 1:26–28). As I explain in "Your Incredible Future" on page 4 of this issue, God wants to give human beings power, glory and eternal life. But, with our vain and self-willed human nature, we are not ready for such power and responsibility until we have truly learned awesome lessons through the crucible of human experience and suffering. Only after he had suffered and was deeply humbled did Job say: "I have heard of You by the hearing of the ear, but now my eye sees You. Therefore I abhor myself, and repent in dust and ashes" (Job 42:5–6).

In the New Testament, the Apostle Paul was inspired to proclaim: "For I consider that the sufferings of this present time are not worthy to be compared with the glory which shall be revealed in us. For the earnest expectation of the creation eagerly waits for the revealing of the sons of God. For the creation was subjected to futility, not willingly, but because of Him who subjected it in hope; because the creation itself also will be delivered from the bondage of corruption into the glorious liberty of the children of God. For we know that the whole creation groans and labors with birth pangs together until now" (Romans 8:18–22).

The very real God of the Bible is certainly hearing the literal "groans" of the suffering people of Southeast Asia. As they—and we—are deeply humbled by the awesome forces of creation that God has set in motion, we will begin to realize that human life apart from the true God is futile. This may seem "cruel" or "unfair" to those who lack understanding of the awesome power and glory that God has in mind for those who truly serve and obey Him. But it is often the only way human beings are willing and able to learn.

Another basic point that even many professing Christians are not willing to face is that God specifically promises—again and again—to intervene and bring about terrible punishments on individuals and nations who refuse to obey Him! To those of you who have read the Bible at all, this should seem obvious. But many people, seemingly, "avoid the obvious!" For instance, in dealing with the Israelites, God promised manifold blessings if they would truly serve and obey Him (Leviticus 26:1–13). However, God also promised specific punishments if the people of Israel would turn aside from Him: "But if you do not obey Me, and do not observe all these commandments, and if you despise My statutes, or if your soul abhors My judgments, so that you do not perform all My commandments, but break My covenant, I also will do this to you: I will even appoint terror over you, wasting disease and fever which shall consume the eyes and cause sorrow of heart" (vv. 14–16).

Yes, if the "Israelites"—ancient or modern—would "despise" God's statutes and show increasing disrespect and even disdain for the Ten Commandments and His entire way of life, He would bring "terror"—or "terrorism"—upon them! Next would come "wasting disease and fever." Then, in succeeding verses, is described the "breaking" of the pride of power of these people and a state of drought and famine (v. 20). Later, even more terrible "pestilence" would come and finally their cities would be laid "waste." Then, God said: "I will scatter you among the nations and draw out a sword after you; your land shall be desolate and your cities waste" (vv. 31–33).

Because, as God deals with individuals, so He often deals with nations to "teach" very needed lessons. "For whom the Lord loves He chastens, and scourges every son whom He receives" (Hebrews 12:6). So, though many are unwilling to listen to what God says, He will intervene—individually and collectively—to teach human beings needed lessons so that we will finally learn to fulfill His great purpose!

God will get our attention—one way or another. He does not do this in spite, but in genuine outflowing concern to help a people who have been totally obsessed with "me-ism" and materialism. He wants us to wake up and be willing to genuinely seek our Creator and fulfill the supreme purpose for which we are drawing breath.

The God of the Bible is inspiring us in this Work. As His servants, we give you very important and helpful warnings about things to come so you may take needed action and avoid the suffering that will come to those who leave the true God out of the picture. Most of you know that articles for a magazine such as this have to be written several weeks ahead of time. So it is that I wrote the following several weeks before the earthquake and tsunami that struck last December 26. Notice the advance warning published in this very editorial space in the January-February 2005 issue of Tomorrow's World:

"Events prophesied in your Bible are now beginning to occur with increasing frequency. In this Work of the living God, we are able to warn you about what is going to happen soon. We are not talking about decades in the future. We are talking about Bible prophecies that will intensify within the next five to 15 years of your life.... I want to give you some common sense advice involving your physical survival and your financial well-being.… Are we living in a low-lying coastal area where we may be in danger at a time of increasing hurricanes, tsunamis or similar natural disasters? Do we have at least a week's supply of emergency food and water, flashlight batteries, a first-aid kit, a battery-powered radio, prescription medications and other essential items? Have we read the instructions from our nation or region about how to prepare for such emergencies as hurricanes, earthquakes or terrorists' attacks?"

My friends, when I wrote those words in late 2004, did I specifically know that the terrible earthquake in Sumatra was going to occur? Of course not. Do I know of any other specific disaster or terrorist attack that may occur between the time I write this and the time you read this present article? Of course not. But, as a servant of the living God, I do know the basic outline of what God says will happen to our peoples at the time of the end. We are definitely now in the prophesied "last days!" We need to be willing to heed the direct words of the Bible in a way we have never done before!

If you are willing to genuinely listen and understand, please take seriously the warnings we give you in the pages of this magazine! For you will definitely see these events unfolding over the next several years of your life in a way that "mainstream" religions do not remotely understand—and certainly that mainstream news writers and columnists do not remotely understand, either! For, human as we are, we in this Work are true servants of the great God who is working out an awesome purpose here on earth. Are you "listening"?

Adapted from “Why Human Suffering?” from www.TomorrowsWorld.org. 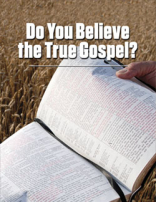