Quick Q&A: Is Purgatory a real place, and is it mentioned in the Bible?

Answer: No. Purgatory is not a real place. It is not mentioned in the Bible. This Web site is named “The Bible Says That”—so we could easily answer with a great big blank space, as the Bible says nothing to indicate the existence of a Purgatory.

Basically, the idea of Purgatory originated because people were trying to reconcile three mistaken ideas:

Let’s start with point 2.  Scripture tells us that at Christ’s return, faithful Christians will be resurrected and changed from matter to Spirit (1 Corinthians 15:52). Until then, the dead Christian is dead in the grave, and could not be in Heaven even if he or she were perfect (John 3:13). No human being who has not been resurrected as Spirit will be in Heaven.

Point 3 is easy, and you can find the answers elsewhere on this site. Immortality is a gift that God will give to faithful Christians at their resurrection to eternal life. Until then, they are “asleep”—dead—in the grave. “The dead know nothing” (Ecclesiastes 9:5).

Point 1 is another discussion, and it raises the question of God’s fairness and justice along with His mercy. What happens to people who live and die in remote parts of the earth where nobody ever heard of Jesus Christ or His True Gospel? Will they go to Hell as unsaved? Or will they have some kind of “special arrangement” made to “burn off” their sins so they can go to Heaven anyway?

It is exactly these kinds of non-biblical misunderstandings that led to the Purgatory teaching. The biblical fact, however, is far more encouraging, and reveals a loving God who is both just and fair.  The “White Throne Judgment” (Revelation 20) is a future time when all those who never had a true opportunity for salvation will receive the True Gospel and be able to accept or reject it knowingly. This will be a physical resurrection of the dead, not a resurrection to Spirit, and will be on the earth.

One big danger of the “Purgatory” doctrine is that it can lead some people to think that since they’ll never be “good enough” to go straight to Heaven when they die, they can relax and sin and know that as long as their sins aren’t “mortal” they’ll just burn off those sins and end up in Heaven anyway. Your Bible, however, says that when Christians have the Holy Spirit they have the power to stop practicing sin as a way of life—they will still stumble, but their overall pattern of conduct will grow ever-closer to the holy and righteous character of God, as they prepare to become part of His Family for eternity. 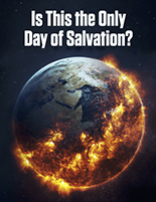