Quick Q&A: How do we know that the Bible is the true word of God?

Answer: The more you learn about the Bible, the more you will see that it is truly a unique book. Other books may try to compare themselves to the Bible, but the Old and New Testaments really do stand alone as being confirmed by history and archaeology, as well as by the proof of those who live successfully by their teachings.

Consider that we have more ancient copies of the Scriptures than we do of thousands of other ancient works. It is easier to prove that the Bible has been passed down to us accurately than to say the same about any number of works from ancient Babylon, Egypt, Greece or Rome.

Also consider that archaeology and modern science stand in harmony with the Bible, unlike other religious books. Compare it to another book from a couple hundred years ago, which claims Jesus was in North America… but no serious archaeology comes close to supporting that book’s claims. Or look at Buddhist and Hindu scriptures insisting on the existence of a mountain so tall that it could not possibly fit on planet Earth. Unlike these other books, the Bible is entirely consistent with true science.

Furthermore, the Bible provides answers to life's big questions. Not only do the hundreds of detailed Bible prophecies accurately reveal the future course of world events; they set the Bible apart from all other religious books! The Bible provides a dimension of knowledge that is simply not available from any other source.

The Bible contains hundreds of prophecies that have come true, and are confirmed by history. What other book can say the same?  Clearly, the authors of Scripture were inspired by God in a way that simply does not compare to any other holy book.  Fulfilled prophecy sets the Bible apart from any other book that would claim to be the Word of God.

Interestingly, after the New Testament was written, some non-Christian religions began to incorporate “prophecy” into their writings. The problem was that, for example, it’s not hard to write a text “predicting” the Buddha if you write that text several hundred years after his life!  With the Bible, however, we have manuscripts dating back to Christ’s day, predicting events that have occurred in the last 200 years or so!  No other scripture can make that claim!  When the Bible says something, it’s worth taking seriously! 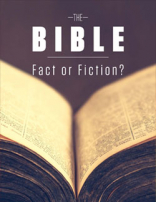