Will You "Prove All Things"?

Most people have not really proven what they believe.  Many people just accept what their family or friends…or society accept.  Most people completely fail to understand or believe that God has put in place great, eternal laws that will help us worship Him in Truth.  And the foundation of these laws are the Ten Commandments.  Perhaps you have been taught that the Ten Commandments were “done away with” or that that they may be a good moral code, but that they have little to do with how a true Christian will live today?  But have you proven this for yourself from your own Bible?  The truth of what the Bible really says may surprise you!  Please read the below, and follow-along in your own Bible to prove what is true!

WILL YOU "PROVE ALL THINGS"?
Roderick C. Meredith

So where did you get your religion? How did you come to believe the things that you believe?

It is amazing to realize how careful most people are when buying a home, for instance, as opposed to deciding which church to join. The house may just fit their need for a number of years. But being involved with the true religion of God has to do with where they will spend all eternity.

Frankly, most of you did not get your religion out of the Bible. It may hurt to have to admit that. But it can easily be proved in the vast majority of cases.

It is very difficult for most people to admit they have been wrong. Human pride just does not want to do that. Yet, according to the inspired Word of God, that is the beginning point of true Christianity. When Jesus Christ began His ministry, He told His listeners over and over, "Repent, for the kingdom of heaven is at hand" (Matthew 4:17). And the Gospel of Mark tells us: "Now after John was put in prison, Jesus came to Galilee, preaching the gospel of the kingdom of God, and saying, 'The time is fulfilled, and the kingdom of God is at hand. Repent, and believe in the gospel'" (Mark 1:14–15). Again, Jesus later said, "I tell you, no; but unless you repent you will all likewise perish" (Luke 13:5).

The word "repent" means to change. Yet, again, most people are not willing to admit they have been wrong and they certainly do not want to change! Are we like the man Sir Winston Churchill described, who "occasionally... stumbled over the truth, but hastily picked himself up and hurried on as if nothing had happened"?

Yet, if your eternal life is at stake, you would be very wise to consider whether you—however sincerely—have grown up in the wrong religion!

Am I indicting "Christianity" as the "wrong religion"? Of course not! But I want to make you aware of the fact that there is both false Christianity and true Christianity. Many do not realize that. But the Bible itself makes it abundantly clear that the false form of Christianity would predominate until Christ's Second Coming. The beloved Apostle John described this very time in which we are living: "So the great dragon was cast out, that serpent of old, called the Devil and Satan, who deceives the whole world; he was cast to the earth, and his angels were cast out with him" (Revelation 12:9). Satan the Devil has palmed off on this deceived world a false Christianity!

The highly regarded modern philosopher, Soren Kierkegaard, in his Attack Upon Christendom, wrote: "The Christianity of the New Testament simply does not exist. Millions of people through the centuries have little by little cheated God out of Christianity, and have succeeded in making Christianity exactly the opposite of what it is in the New Testament."

So each of us needs to prove what we believe by really studying the Bible. We need to drink out of the Bible what it says rather than reading our own pre-conceived ideas into the Bible.

Think for a moment. Why is professing Christianity divided into hundreds of competing denominations and sects? Why do churches calling themselves Christian have so many differing beliefs and practices? Could it be that God is the author of confusion? Or might there be another explanation?

Consider the warning Christ Himself gave: "For many shall come in my name, saying [that] I am Christ; and shall deceive many" (Matthew 24:5, KJV). Jesus did not say here that only some few would come in His name, but rather that "many shall come"! They come as "Christian" preachers, proclaiming Jesus as the Christ—yet deceiving many! In other words, there was to be a mass deception based on the false teachings of the many who would claim to come "in Jesus' name."

Frankly, it is easy for religious teachers to appropriate the Son of God's name as a cloak for their personal doctrine, whether or not what they say has any relationship at all to the real Jesus' life or teachings! That is why the Apostle Paul tells us: "Prove all things; hold fast that which is good" (1 Thessalonians 5:21, KJV). Each one of us is responsible to "check up" on the doctrines we are taught—whatever the source. Don't make careless assumptions! Be sure you know what the Bible really says!

Paul further admonishes: "For if he who comes preaches another Jesus whom we have not preached, or if you receive a different spirit which you have not received, or a different gospel which you have not accepted; you may well put up with it!" (2 Corinthians 11:4). In other words, Paul feared that some of the Church members of his day would fall prey to "counterfeit" ministers and would come to accept a false gospel about a false Christ!

What about you? Is it possible that you have put up with "another Jesus"? Might you have been deceived into believing in a false portrayal of Christ—along with a false message merely purported to have come from the true Jesus? How can we know what is true and what is not?

Again, we need to truly study the Bible to attain genuine understanding. We need to be willing to open-mindedly consider if we have been following the "traditions of men" rather than the commandments of God (Matthew 15:3).

As we study the Bible, we need to learn to let the Bible interpret the Bible. In other words, if something seems unclear, then we should let the plain, clear verses help us understand those that are not clear. We need to learn also to study the Bible straight through like we would any other book. Many people simply skip around here and there and read sentimental verses of encouragement. While this may help at times, it does not give genuine understanding of the whole plan and purpose of God, which He reveals in His instruction manual for mankind—the Holy Bible.

Begin by studying the Gospel of Matthew—the first book of the New Testament. Read right through Matthew slowly, marking what you feel are the important verses. Then, next day, review these verses you have studied and read slowly—meditating and marking—a few more chapters. In this way, you will become familiar with what the Bible actually says—not what misguided men may tell you that it says!

In fervent personal prayer, ask God for understanding. Be willing to follow the Christianity of Christ no matter what. Always remember the Apostle Paul's vital statement: "I am crucified with Christ: nevertheless I live; yet not I, but Christ liveth in me: and the life which I now live in the flesh I live by the faith of the Son of God, who loved me, and gave himself for me" (Galatians 2:20, KJV).

Through the promised Holy Spirit, will Christ live the same kind of life in you that He did live more than 1,900 years ago in the human flesh? Hebrews 13:8 tells us: "Jesus Christ is the same yesterday, today, and forever." Did Christ keep the Ten Commandments while He was in the human flesh? John 15:10 tells us, "I have kept my Father's commandments."

If you need help in studying the Bible, write or call immediately to enroll in the Tomorrow's World Bible Study Course. This thorough course will not just lead you through a lot of sentiment. Rather, it will help you genuinely understand the great plan of our Creator for all mankind. It will help you prove from your own Bible what you should do to fulfill your part in God's Plan. If you wish to enroll, return the insert card stitched into this magazine, contact the regional office nearest you (listed on page 30 of this magazine), or go online to www.twbiblecourse.org.

As the end of this age approaches, may God help you genuinely study His inspired Word and prove what you believe from the Bible. Then, you will be on a solid foundation. And you will come to genuinely know God—and the resurrected Jesus Christ at God's right hand—in a way you have never experienced before. 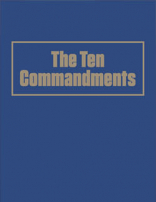