"Left Behind" Leaves the Truth Behind

The old “Left Behind” books and movies were read and watched by millions!  But where do these theories come from?  Is a secret, end-time rapture found in the Bible?  What does the Bible really say about Jesus Christ’s return and His saints at the end of this age?  Is the main premise of these types of movies actually true? Many people believe so.  But what does Scripture really say?  Please read on!

"Left Behind" Leaves the Truth Behind
Wallace G. Smith

The movie is driven by one main concept: The belief that around seven years before Christ's return, Christian believers everywhere will be "raptured" up to live in heaven, disappearing instantly all over the earth in unexplainable fashion, before the terrible trials that will befall mankind climaxing in Jesus' return.

In the film, chaos ensues all over the world, as "believing Christians" everywhere vanish into thin air in an instant when Jesus comes "secretly" to whisk them away to heaven (leaving—often to unintended comic effect—nothing but their clothes where they once sat or stood). Planes, suddenly lacking a pilot, crash to the ground, and cars, suddenly driverless, careen out of control. Our heroes in the film are amongst those who were not believers and who are, thus, left behind, to face the events that follow.

The Rapture theory is very popular among evangelicals, and many of them have hoped that LaHaye and Jenkins' books would introduce the idea to many non-believers as a warning to what is to come. The new movie, featuring a bigger Hollywood star than the last version in the form of actor Nicolas Cage, has renewed those hopes.

The main problem with all of this, however, is that the Rapture theory is utterly and completely false.

It is true that the Great Tribulation is coming and that the world will experience—over three-and-one-half years—the rise of the Beast and the Antichrist, as well as God's punishment on the unrepentant of mankind during the year-long Day of the Lord.

However, the idea that Christians will be zipped up to heaven during this time is completely unbiblical, based loosely on twisted interpretations of a few verses.

Yes, some Christians will be protected from the times to come, but their protection will not be in heaven. Rather, God promises to physically protect them on the earth for three-and-a-half years in a place of safety, somewhere here on earth (Revelation 12:13-16). Yet, however much it may surprise many churchgoers, the Bible also indicates that many Christians will not be protected and will actually go through the Tribulation, thus facing directly Satan's wrath (v. 17)!

The Apostle Paul makes it clear that Christians are not transformed and taken up to meet the returning Jesus Christ until the last trumpet (1 Corinthians 15:52) at the end of the three-and-a-half years (Revelation 11:15)—only days (not seven years) before the devil is put away from mankind for a thousand years.

Let the movie critics and newspaper reviews discuss the acting, the special effects, the plot—whatever. If the movie claims to be a Christian movie depicting a prophetic event, then the main issue is whether or not it is true. And this one simply is not.

Taking a false doctrine and adding Nicolas Cage to it does not turn it into a true doctrine. "Left Behind" should be left behind. Check out the Bible instead! The truth is a lot more gripping than the fantasy, and it is a story that you and your family, in one way or another, will one day experience personally in your own lives.

Adapted from “'Left Behind' Leaves the Truth Behind” from www.TomorrowsWorld.org. 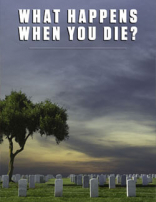