What does the Bible say about (keeping) Christmas?

What does the Bible say about keeping Christmas? Actually, a lot! But not what you might expect. In fact, the Bible is very clear: Jesus does not want Christians to keep Christmas.

It really is pretty simple, though many people often try to make it complicated. And if you’re brave enough to face the facts, then here they are!

First, the origins of Christmas as a pre-Christian, pagan holiday are well documented in any encyclopedia worth its salt. Even Wikipedia gets that part right. The evergreen tree, the holly, the mistletoe, the gift-giving—all of it comes from pagan, pre-Christian winter festivals. Check them out yourself in the online resource of your choosing: Saturnalia, Sol Invictus, winter solstice celebrations. The pagan worship of the “reborn sun” in winter was simply overlaid with the Bible story of Jesus’ birth. Even mainstream, conservative Christian commentators agree: The symbols and trappings of the Christmas season have their origins in pagan worship practices, although many Christmas “meanings” have been applied to them over the years in an attempt to “Christianize” them.

Second, the Bible is clear that God commands people not to take on pagan worship practices. Don’t believe us—read it for yourself! In Jeremiah 10:2, God says plainly, “Do not learn the way of the Gentiles…” (Actually, you’ve got to read the next few verses. It’s the only place you’ll read about a Christmas tree in the Bible—decorated with gold and silver, and everything. And God makes it pretty clear He’s not a fan.) In fact, God not only commands people not to use pagan worship practices, but He commands them not to use them even if they are trying to worship Him! He says in Deuteronomy 12:30, speaking of the pagans outside of Israel, “do not inquire after their gods, saying, ‘How did these nations serve their gods? I also will do likewise.’ You shall not worship the LORD your God in that way…” Catch that? Even if the intent is to worship God, He doesn’t want pagan methods used to worship other God to be used to worship Him. Pretty plain!

And finally, what about Jesus? After all, didn’t Jesus come to get rid of all of those commands? Nope. Not even. In fact, he addresses the question of what to do when our traditions (like Christmas) disagree with God’s commands (like His command not to worship Him with pagan customs). Asked about these sorts of things and about people who were breaking God’s commands to keep their own worship traditions, “He answered and said to them, ‘This people honors Me with their lips, but their heart is far from Me. And in vain they worship Me, teaching as doctrines the commandments of men.’ For laying aside the commandment of God, you hold the tradition of men…” (Mark 7:6-8). He summarized it pretty well: “All too well you reject the commandment of God, that you may keep your tradition” (v.9).

So, in short, what does the Bible say about Christmas? It says that keeping Christmas—a holiday with widely recognized pagan origin—breaks God’s commands, and Jesus Christ condemns keeping it. 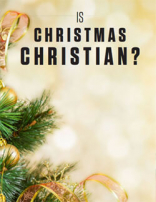